PFLAG, Ft. Worth, Texas began as a support group in the office of Dr. Rita Cotterly, founder of the Sexuality Education Center in downtown Fort Worth. From a base attendance of one parent and one gay man, the group grew to 10-15 people attending regularly on a monthly basis. After several months, with the encouragement of then Regional Director of PFLAG, Sandy Moore, the group agreed to submit an application to become a chapter of the national organization. Meetings were begun to formulate by-laws and to complete the necessary forms to register with the state as a non-profit organization. All prerequisites having been met, PFLAG, Fort Worth was granted a charter and accepted as a new chapter in August, 1992. The chapter began holding meetings at First Jefferson Unitarian Universalist Church, where it since has met continuously, year round. From the beginning the meetings featured speakers as well as support groups, furthering the first two of its mission goals, support and education.

In the first year of its life, the chapter began participating in Fort Worth and Dallas Pride events. When Samaritan House, a residence for people living with AIDS, was established, the chapter took on the project of furnishing one of the resident’s rooms. For years the chapter has provided supper once a month for the residents. 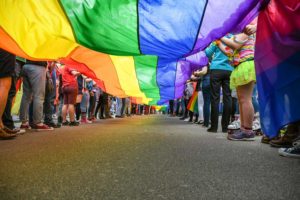 The chapter began early to advocate, the third goal of its mission. The first public advocacy was in behalf of gays in the military during the first year of President Clinton’s administration, when he attempted to change the military’s policy toward gays and lesbians. As members of the chapter educated themselves about the issues of the gay, lesbian, bisexual, and transgender communities, they advocated through letters to legislators and participation in the biannual marches on the capital in Austin. When Fort Worth reconsidered the addition of sexual orientation to the city’s non-discrimination ordinance in 1998, members of the chapter spoke out in support. In 2000 Fort Worth became the second city in Texas to include sexual orientation in its non-discrimination ordinance.

The chapter continues to grow as it reaches out to the community of parents and gay, lesbian, bi-sexual and transgender persons and their families and friends.